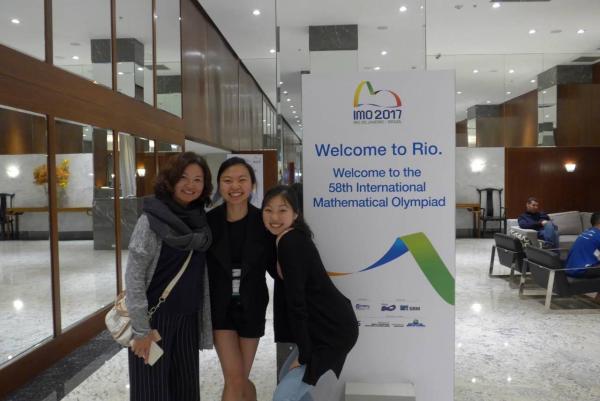 This year, the 58th International Mathematical Olympiad was held in Rio de Janeiro, Brazil from the 12th to the 23rd of July. There, contestants solve six questions, three on each day, in sessions of four and a half hours. These questions are ranked in order of difficulty with 1 and 4 being the easiest, 2 and 5 being harder and 3 and 6 being the hardest. Each question is marked out of 7. Depending on how many points are gained, contestants can be awarded a bronze, silver or gold medal or if they don’t receive a medal but gain a 7 on a question, they receive an honourable mention. This year, 16 points were required for bronze, 19 for silver and 25 for gold and unfortunately with my score of 15, I missed out on bronze by one point. Nevertheless, this was a wonderful experience where I was able to meet those passionate about mathematics from all over the world.

111 countries participated in the Olympiad this year, sending teams with one to six contestants. This year, 615 contestants were males and only 62 were females. This was a disappointingly low number however, the organisers were very encouraging towards the few of us who were there. A Round Table was held with five prominent females in STEM, each recounting their own experience as a woman working within the sciences and technology. They spoke about the problems they perceived and how they thought these problems should be solved. This was a very enlightening talk and I especially agreed with what one woman said about how it is important to show women doing science and technology to give future generations of females the ability to imagine themselves doing the same.

Apart from the competition, we were also able to explore Rio de Janeiro. On the afternoon of the final day of competition, our wonderful guide, Leticia, took us to one of Rio’s malls where the Lego Expo was being held. This featured pieces of art by a Lego artist, each with its own significant meaning. The next day, we went to see the Sugarloaf Mountain, which gave us a magnificent panoramic view of the city. There, we also met the British team. That afternoon, there was a group photo of all the contestants on the Barra beach and a separate photo of only the female contestants. It was really amazing seeing so many of us, all gathered in one spot. On the following day, we had the official excursion organised by the International Mathematical Olympiad organisers. They took us to see the Lagoon, the Olympic Boulevard and the Maracana Stadium. Finally, we went to see Christ the Redeemer on the final day of the event. Overall, being able to see the city was a great highlight of the competition.

For the duration of the competition, we stayed at the Windsor Oceanico Hotel. Contestants roomed in groups of three. As I was the only female on the New Zealand team, I was assigned a room with the two girls from the Irish team. This was so nice after being surrounded by boys for a week. It was also great to be around people who were so similar to me and also did maths as I sometimes found that my interests differed from those of my team.

Overall, the International Mathematical Olympiad was an amazing opportunity for me to meet others passionate about maths. It gave me the chance to get to know other girls who loved maths, something that I am not always able to do in New Zealand with so few of us. I would like to thank the Association for Women in Science for granting me the chance to do this. I have grown so much from the experience and it is one that will stay with me for life.